in Pasadena, Texas · about Sightseeing
All eyes are on this SoCal city every New Year’s Day for two of America’s most iconic annual events.
Pasadena, California plays host to the back-to-back morning Rose Parade and afternoon Rose Bowl Game. The game is one of the major bowl games in college football, but the Rose Parade that precedes it is truly one-of-a-kind.
The Rose Parade dates back to 1890. Pasadena had become a popular West coast wellness resort town for the East’s elite. Town leaders wanted to show off their blooming rose gardens and orange groves to the East as it remained under winter snow and ice. The parade, featuring the unique spectacle of flower-covered floats as well as equestrian units and marching bands, traded county-fair type ‘tournaments’ like foot races, polo matches and tug-of-war for football at the turn of the century. Amazingly, it’s continued uninterrupted ever since, even during both World Wars.
Millions watch on TV world-wide, and hundreds of thousands attend in person. But sports fans, floral admirers, and parade lovers have much more to entertain and intrigue them during a visit to Pasadena at New Year’s or any other time of the year. 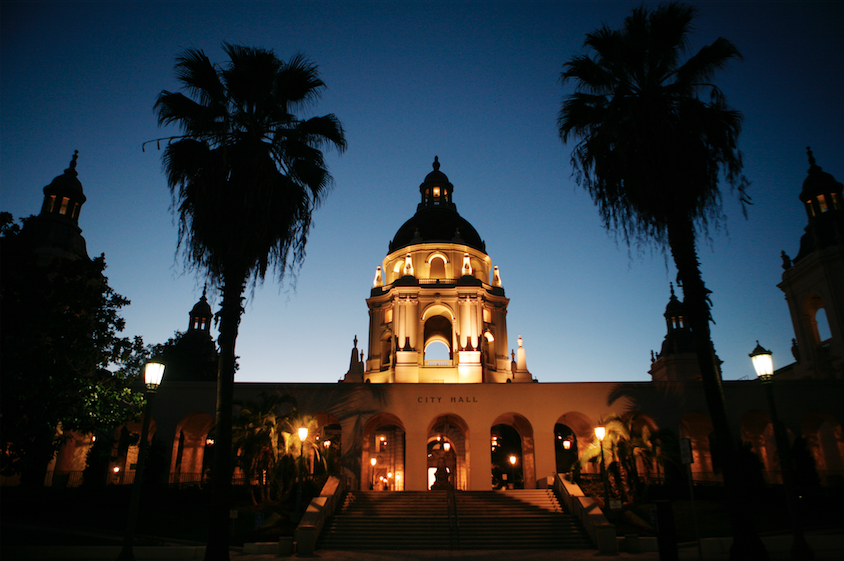 Dating back to the 1870’s when the town was establishing its credentials as a wellness escape from winters back East, Old Pasadena Historic Area is a US National Historical Landmark. Visitors can stroll through 22 blocks of quaint alleyways or airy European-style piazzas teeming with 200 outdoor cafes, restaurants, art galleries, boutiques and specialty shops. 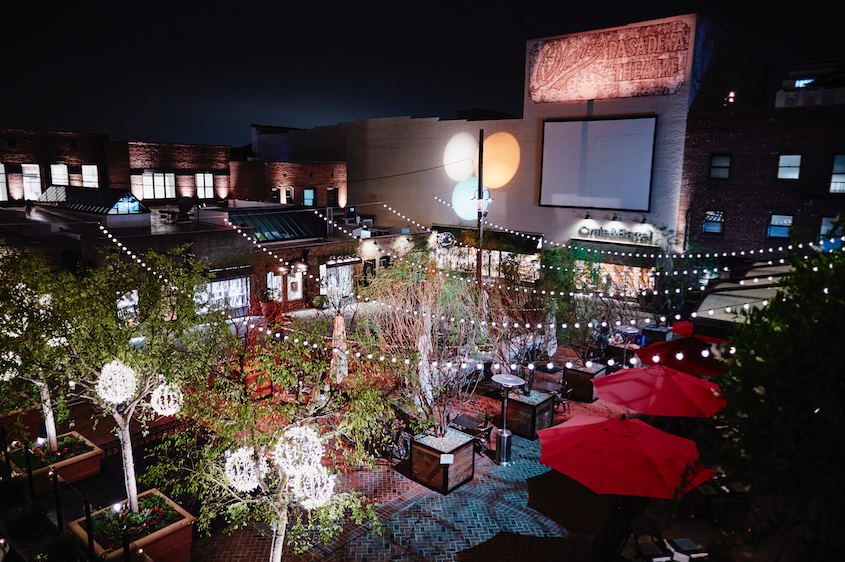 This ornate, Italian Renaissance-style mansion on Pasadena’s ‘Millionaires’ Row’ was once owned by chewing gum mogul William Wrigley, Jr. It was built in the early 19th century, and Mrs. Wrigley willed the property to serve as the headquarters for the Pasadena Tournament of Roses Association, the non-profit that still produces the Rose Parade today. Displays inside showcase the history of the Rose Parade and Rose Bowl Games, as well as parade Grand Marshals and Royal Court.
Volunteers from the Pacific Rose Society maintain the hundreds of varieties of roses, camelias and other flowers in the gardens in the grounds of Tournament House. The gardens and the house can be toured by the public.

Pasadena’s heyday as a magnet for the wealthy building vacation and West Coast homes in the early 20th century made the city a natural incubator for the era’s Arts & Crafts movement. Pasadena architects Charles and Henry Greene became influential with the houses and their large-scale ‘ultimate bungalows’ that are prime examples of Arts & Crafts style, with all the interior design elements and furnishings designed by the architects as they designed the house itself.
Their Gamble House is called ‘America’s Arts & Crafts masterpiece’ and is also considered one of the finest examples of overall residential architecture in the entire country. Greene and Greene built the house and its furnishings in 1908 for David and Mary Gamble (of Procter and Gamble soap and toothpaste fame). It’s one of the few Greene and Greene projects with the original furnishings remaining and is National Historic Landmark. The City of Pasadena and the University of Southern California’s School of Architecture operate the house today. Two lucky 5th-year architecture students get to live there, and it’s open for public tours and events.

The huge Rose Bowl Flea Market is held every second Sunday of the month. The legendary market draws 20,000 vintage treasure seekers and bargain shoppers who rub elbows with celebrities and designers looking for one-of-a-kind pieces. 2500 vendors set up rows of specialty products, antiques, local art, vintage clothing and accessories. Merchandise is arranged by type, and there’s a color-coded map to guide you. Entry ticket prices drop the later you enter the market, and you can even purchase pre-opening VIP preview tickets for serious or competitive shoppers/collectors.

The Huntington is located on the 207-acre estate of the late Henry Huntington. The railroad tycoon amassed what was called 'the greatest group of 18th-century British portraits ever assembled by any one man' and it was opened to the public in accordance with his will following his death in 1927.
The renovated Huntington Art Gallery offers a space showcasing 1,200 objects of European art from the 15th to the early 20th century, including the18th and 19th British and French masterpieces like the renowned “Pinkie” and Gainsborough’s “Blue Boy.” 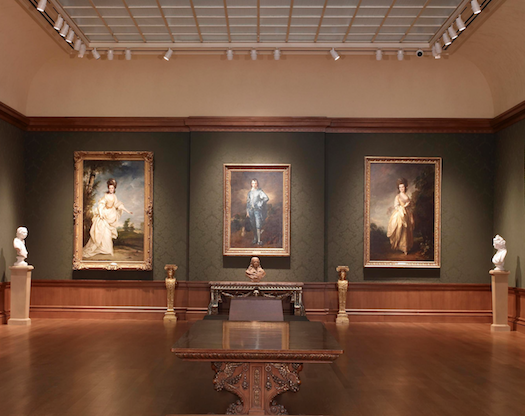 Courtesy Huntington Library, Art Collection, and Botanical Gardens
The newly expanded Virginia Steele Scott Galleries of American Art offers one of the largest presentations in California of American art from the colonial period through the mid-20th century.
The Library includes works from American and British literature, including an original Gutenberg Bible and Ellesmere’s manuscript of Canterbury Tales as well as the photographic archive of the Dead Sea Scrolls.
The botanical gardens feature 14,000 varieties of plants on more than 150 acres divided into specialized gardens including the Rose Garden, Herb Garden, refurbished Japanese Garden, Desert Garden, Zen Garden, Australian Garden and Children’s Garden. In the Chinese Garden, visitors can stroll around the 1.5-acre lake bordered by Tai Hu rocks and enjoy landscape that includes five hand-carved stone bridges, a stream, and a canyon waterfall connecting to the Japanese Garden. 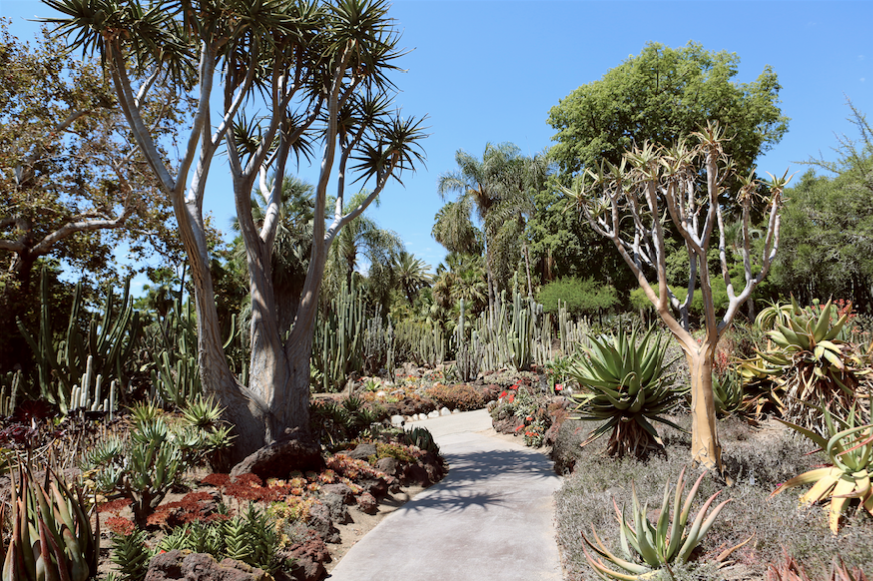 This extraordinary museum features seven centuries of European art and one of America’s largest collections of Asian sculpture that spans 2,000 years. The museum is home to an extensive Impressionist collection, which features masterpieces by Degas, Van Gogh, Manet, Monet and Pissaro. The museum also features works by Picasso, Rembrandt, Cézanne and more.

Pasadena is an outdoor wonderland, and you can explore trails and parks to connect with nature. Eaton Canyon Natural Area is a 190-acre zoological, botanical and geological nature preserve with picnic areas, native plants and hiking trails. Be sure to take the kids to Junior Nature Trail, less than a quarter mile, which is scenic with a pond, California sagebrush and animals like birds and rabbits.
Visitors who like more dramatic views head to Mount Wilson Observatory, a 5,700-foot astronomical observatory residing in the San Gabriel Mountains. Visitors roam the beautiful grounds, dazzled by a simple – yet powerful – scene of endless, clear blue sky. Warning: sunsets are addictive.

Photos courtesy Visit Pasadena.
Copyright BestTrip.TV/Influence Entertainment Group Inc or Rights Holder. All rights reserved. You are welcome to share this material from this page, but it may not be published, broadcast, rewritten or redistributed.

Please, Signup or Login first to write a comment

Tips for Drinking in Japan

Just as water is served automatically at a restaurant tab...

The Ultimate Travel Experience for Yo...

The Force is Strong with This Plane. Just in time fo...

The World's Largest, Most Spacious Lu...

It's an ice-class ship with the latest technology, able t...